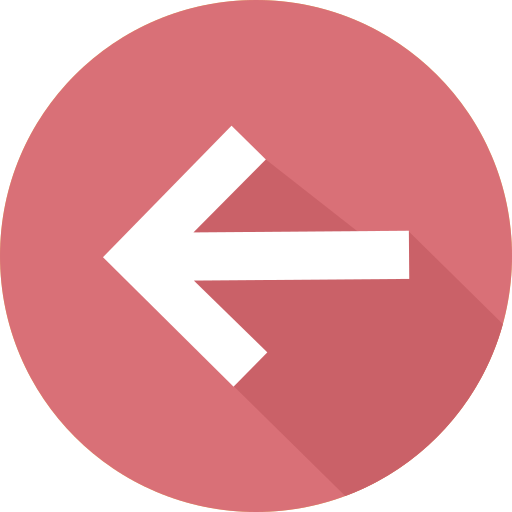 My brother and I set out to create a short video competition app, one year after the demise of Twitter’s Vine. The biggest problem we were trying to solve was that new creators were finding it hard to be discovered and rewarded. The objective was to create an app that was similar but also unique; we weren’t looking to revive Vine but rather use it’s lost momentum to our advantage. Thus, I created a design that was new and refreshed, while adding many new elements and features. However, I had to do design fast, as other developers and creators were already in the race to create similar products.

I began my research process by downloading all the other similar apps on the market. By doing so, I recognized patterns and design choices that other creators made. These apps also gave me an idea of who our target audience/users would be; helping me to decide on video categories and simple features that users were already used to. I went on to read many articles related to social media, videos, and teen psychology. During my research, I discovered a great piece on human attention-spans. This article allowed me to decide on a video capture limit to keep creativity at a maximum while making OEVO fun and challenging.

Nevertheless, we still needed a big feature or part of our app that would help us standout more than all the other apps on the market. For that, we went back to tacking our biggest problem and made the world’s first short video competition app. Where users would be monetarily rewarded for their creativity through daily competitions.

After a long yet necessary research process, I began the first step of our design. Before going
digital, I often like to put pencil to paper and sketch a rough draft of the design that’s in my head. 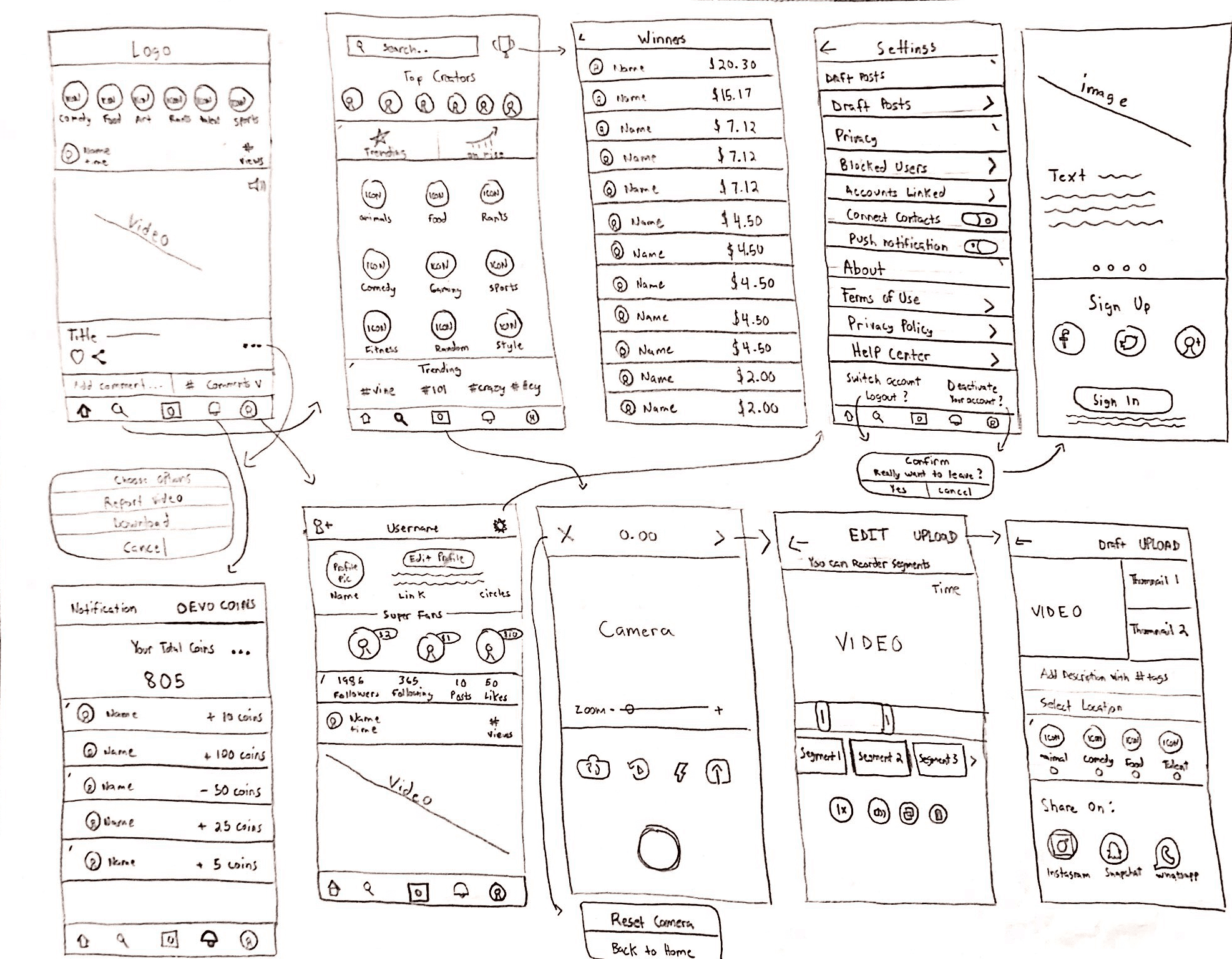 These are the first sketches of OEVO’s most popular pages. From here, I chose to use Photoshop
and Sketch to digitize my sketches into renders and mock-ups. The first screens of OEVO that I
created looked like this 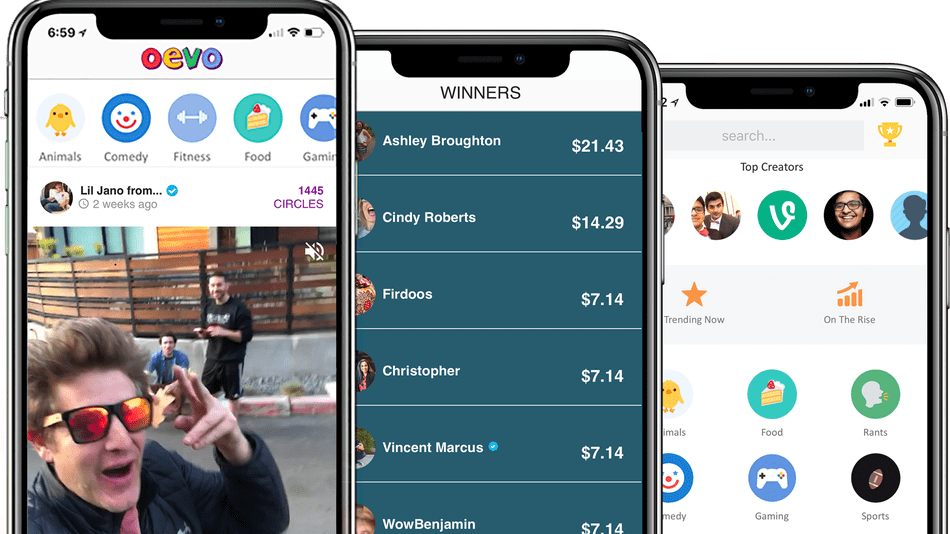 After we launched our beta and people started to use OEVO, we recognized certain issues they were facing. We opened up our social media accounts to feedback and asked users to utilize our website to report bugs and recommend changes or features. While smaller bugs and design flaws came up, we changed them quickly; releasing updates of OEVO every 2-3 days. However, as feedback and recommendations came pouring in, I knew that we would soon need to refresh the design of OEVO. 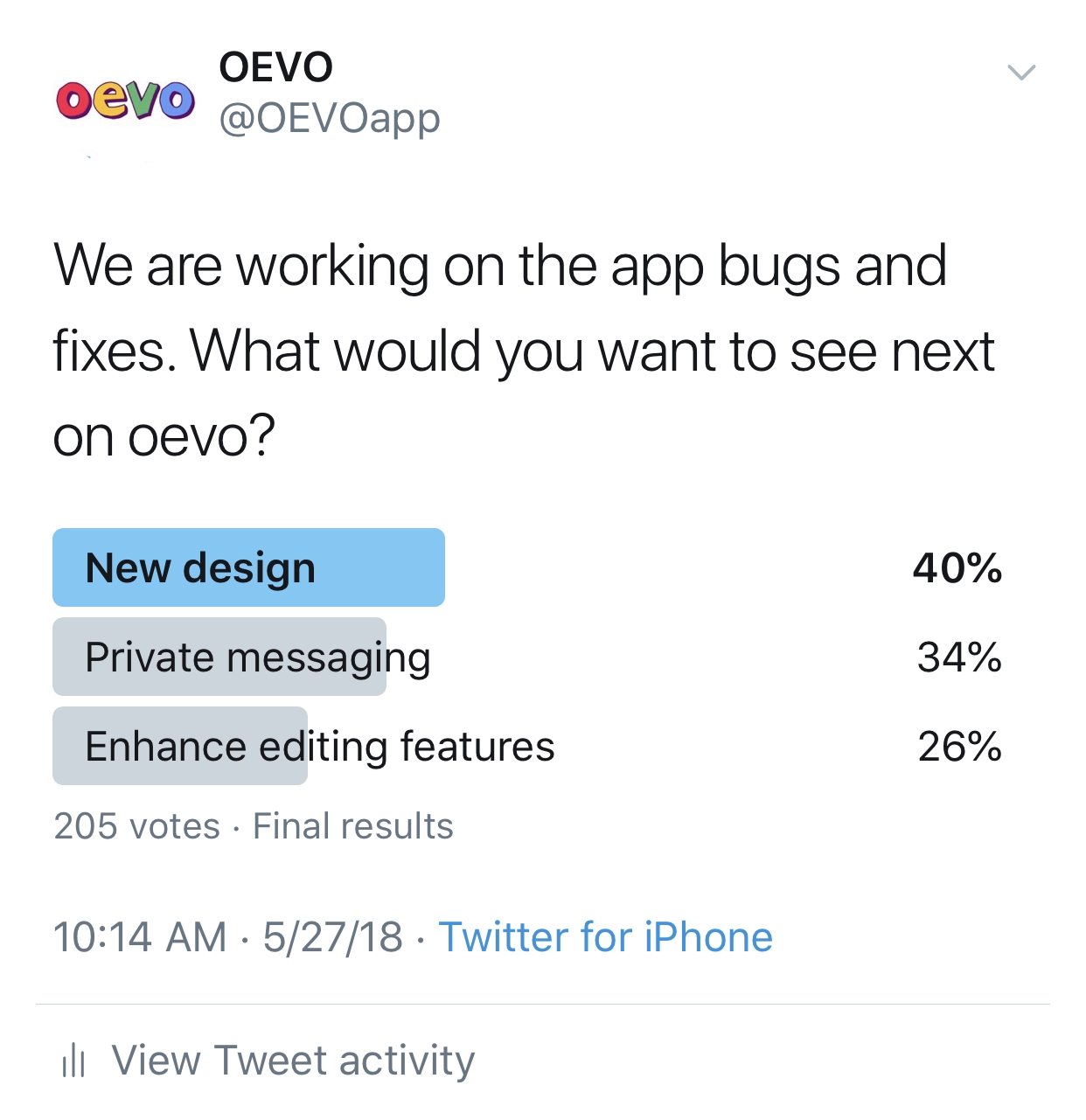 To help with the design process this time around, I created group-chats with 50-100 of our most active users, and asked them about features & design changes they wanted in the new implementation.

Then, I talked to our Developers and Engineers to discuss limitations and implementations of new features. While our Engineers worked on developing and adding core new features such as, group-messaging, donating, and sponsoring; I went back to creating. I used our existing design as the backbone and starting point for the more modern and refreshed design thats live on the App Store today and shown below.

After the release of our new design, which included features such as in-app messaging, a better on-board camera and more ways for creators to earn money. We saw a 100% increase in app-opens and over a 95% increase in time-spent on the app. We also saw a growth in organic app-downloads and invites.

Designed a short-video competition social network application, with two other founders and a small team of Engineers and Developers. As the Product Lead, I was in-charge of designing the application and new website, while also taking on a research and feature implementation role. I conducted user research to understand our market and learned about similar products and apps, defined project scope, and formalized an execution plan, while creating sketches first mock-ups and renders. Through implementing user feedback, we grew OEVO’s user base to over 300,000 registered users in over 120 countries worldwide, with a refreshed design, and some new features. OEVO started trending on the Apple App Store, and peaked at #29, beating apps like Twitter's Periscope, Houseparty, and many more. 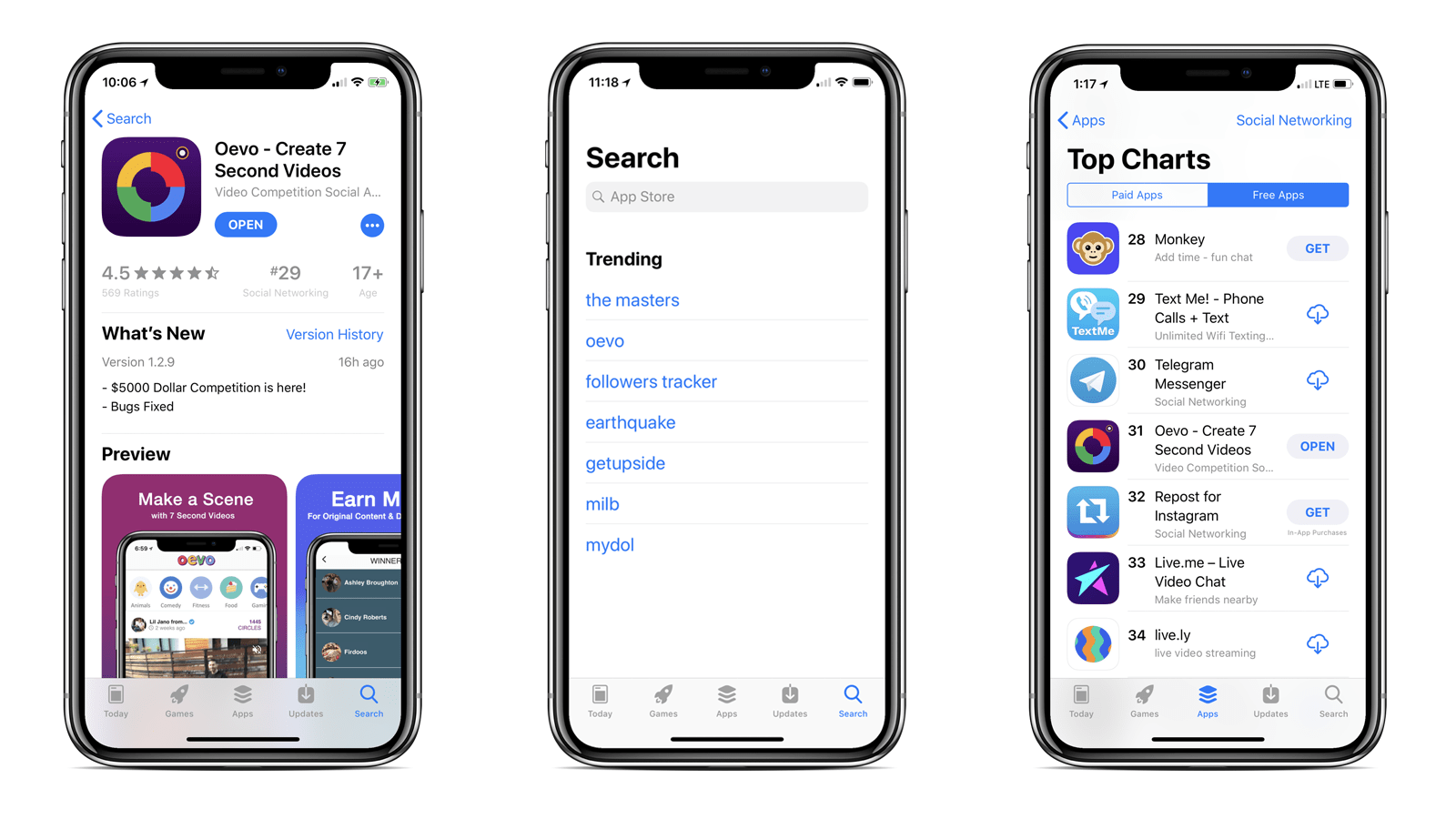